Now the longest established Oasis tribute in the world. Together for 18yrs and with over 2,000 shows under their belt, it’s easy to see why they are the most successful and admired Oasis show out there. With several tours on the prestigious o2 Academy circuit, appearances at huge open air festivals, continual tours across the UK and Ireland plus gigs all over Europe, the Middle East and even the Caribbean!

The backstage bust ups and slanging matches on Twitter proved too much for this great British band but DEFINITELY MIGHTBE don’t share the same sibling rivalry as the real thing. They do however have a lot in common when it comes to reproducing the rousing anthems, stage presence and atmosphere that the originals created. Playing a selection from all seven albums including the hit singles, live favourites and a couple of Noel’s acoustic numbers make this a great show to watch.

Lead singer Ian bears an uncanny resemblance to Liam and has worked as a look-a-like in the UK appearing on BBC1, Channel 4, Sky TV and ITV. Publicity campaigns and advertising for HMV, Virgin, Q Magazine, Loaded, Royal Bank Of Scotland, Lloyds Bank and the National Press. Ian was also asked to star in a video for heavy metal legends MOTORHEAD as Liam and also providing a voice over for a recent documentary accompanying the new Oasis-”Time Flies” DVD. To add to this, Ian has the knack of sounding like Liam too and was asked to provide the vocals on a dance remix of Wonderwall set for release in summer 2010.

Paul Mitchell takes up the reigns as Noel and mimics the riffs and lead breaks with such precision you’d think you were listening to the CD. A very loud CD. While the rhythm section of Kev Pyne on bass and Pete Coppard on drums keep everything locked together and completes the DEF MB family.

So, as good as the real thing? Well the lengendary Alan McGee thought so when he recently introduced the band live on stage! So they…..DEFINITELY MIGHTBE. 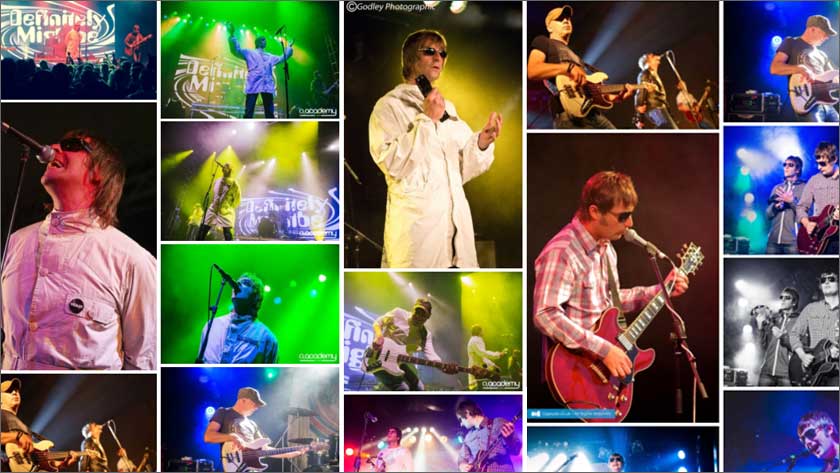 Click the image above to open the Definitely Mightbe gallery featuring images taken from our 2,000 shows worldwide.

Check out our other bands

We use cookies to collect and analyse anonymous usage information. This enables us to continually improve our site. You consent to our cookies if you continue to use this website or click Accept. Find out more.